Cupron, Inc. is a copper-based antimicrobial technology company that harnesses the unique properties of copper for healthcare, consumer, industrial, and military applications. Cupron embeds specified copper compounds in select polymers that enable finished products to deliver the desired impact. Unlike topically-applied solutions, Cupron’s durable embedded copper technology does not wash or rub off.

In the first field test of Cupron’s technology, the famed Chilean miners trapped in the Copiapó mine were provided with prototypes of Cupron’s antifungal socks.

Cupron Enhanced EOS Solid Surfaces registered with the EPA to kill 99.9% of bacteria in under two hours, a unique registration for an antimicrobial polymeric surface.

Cupron’s technology in a fiber and fabric received the first and only EPA public health claim for specific anti-fungal protection, namely to kill athlete’s foot fungus on that fabric.

The first trial of Cupron Medical Textiles was conducted at Reuth Hospital in Tel Aviv, Israel.

Awarded Anti-Odor Claim from the EPA.

In late 2016 Cupron moved from the Richmond Biotech Center to our own facility near Richmond International Airport. The new facility has over 3,000 square feet of office space, 11,000 square feet of warehouse space, and our own state-of-the-art textile engineering and microbiology lab – optimal for our current growth phase.

Sentara expanded deployment of Cupron Medical Textiles to all 12 hospitals within the health system. 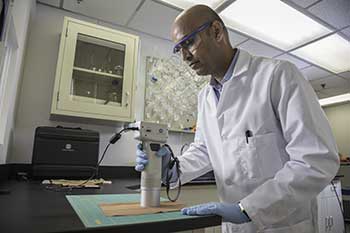 Learn More About Our Technology